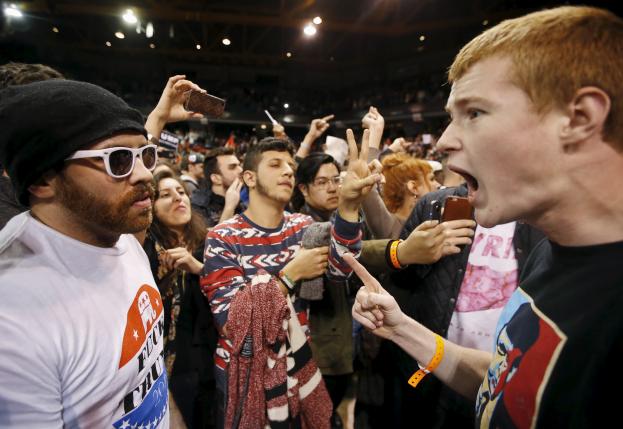 Last night in Chicago, the hatred, fear, loathing, and vile racism that have been the hallmarks of the Donald Trump campaign reached their apex. Trump, saying he feared for the safety of those who had come to attend his rally, canceled it at the last moment. Mayhem erupted in the pavilion and punches were exchanged. Despite what Trump may now claim, it was a calculated move by his campaign to incite a riot for the purpose of his own political fortune.

Earlier in the day, in St. Louis, Trump was also the ringleader of a circus which ended with violence when he said of those who came to his campaign event to protest:

“These people are destroying our country.”

While he was at, Trump also told those who protested his poisonous language to “get a job” and “go home to Mommy.” Yes, his usual sophomoric jibes, designed to whip his mindless followers into a frenzy.

But while watching the melee in Chicago on TV last night, one thought immediately occurred to me: This is the beginning of the end for Donald Trump. He may think he can spin this moment to his benefit, but he’s wrong, and here’s why I say that:

While Trump is indeed stirring up division and sowing discord wherever he goes, he is neglecting to realize that the majority of Americans are repulsed by him and what he says. He may draw the support of 35-40% of the GOP base, and he may be leading the Republican race for the nomination, but he is destined to fail. And when that happens, when Trump is rejected by the voters, in the primaries or in the November general election, it will finally be clear to all of us the price we have had to pay for our temporary fascination with this noxious demagogue.

And for Donald Trump himself, I have this reminder, this warning: The same crowds that lift you up today, raising you to the pinnacle of your own self-aggrandizement, can just as easily turn on you tomorrow. And when they do, they will rip you to pieces.

Since Trump loves to claim that the Bible is his favorite book of all time, I have a verse of scripture he should ponder:

“He who troubles his own house will inherit wind, And the foolish will be servant to the wisehearted.” (Proverbs 11:29)