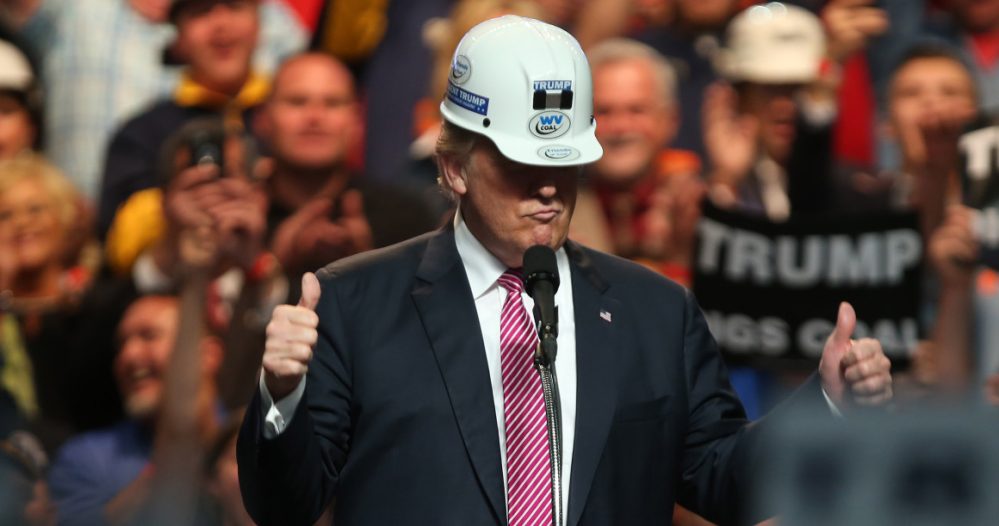 During the course of the 2016 race for the White House, Donald Trump repeated a line that drew applause everywhere he went: He was planning to spend billions of dollars on infrastructure–roads, bridges, tunnels, airports, schools–which would rebuild the country’s backbone and also put people to work. Great idea!

Go to the Trump campaign website and you see hazy promises to increase investment in “transportation, clean water, a modern and reliable electricity grid, telecommunications, security infrastructure, and other pressing domestic infrastructure needs.” Yes! When do we start?

We don’t. Like nearly everything Trump said on the campaign trail, there is no actual plan to spend a dime on infrastructure. Instead, there’s a white paper which suggests Congress offer $137 billion in tax breaks to private investors who want to finance toll roads, toll bridges, and other projects that generate their own revenue streams. In other words, the roads and bridges might get built, but even if they do, you’re gonna have to fork over money to use them. Starting to feel angry yet?

“This is unlikely to do much for road and bridge maintenance. And [economists] have long believed that the highest returns are for fixing existing infrastructure.”

Here’s another fact which suggests Congress isn’t going to suddenly open up the Treasury and let loose with some major bucks to rebuild decaying American infrastructure: Back in September, when asked whether he would help Trump pass a $550 billion infrastructure program, Speaker of the House Paul Ryan laughed loudly. Does that sound like he’s on board to you?

As for the Senate, Majority Leader Mitch McConnell said an infrastructure bill is “not a top priority.” See, the House and Senate plan to be far too busy gutting the Affordable Care Act, Dodd-Frank, Medicare, Medicaid, and privatizing Social Security.

There is no shortage of work that needs to be done in the United States. Kevin DeGood, the director of Infrastructure Policy at the Center for American Progress noted:

“And this plan does essentially nothing for any of those. There are only a very, very small number of projects that would fit the parameters that would make them attractive in theory for tax credits. Because you have to be able to charge really high margin tolls and user fees. So the facility has to be big enough and have high demand that it’s going to generate revenue that you can go out and take on expensive private equity capital.”

So for all those blue-collar workers in Michigan, Ohio, and Pennsylvania who voted for Trump because you believed he was going to put you back to work, you got hoodwinked. How does that make you feel?

One thought on “Remember That MASSIVE Infrastructure Spending Trump Promised? Yet Another Lie”