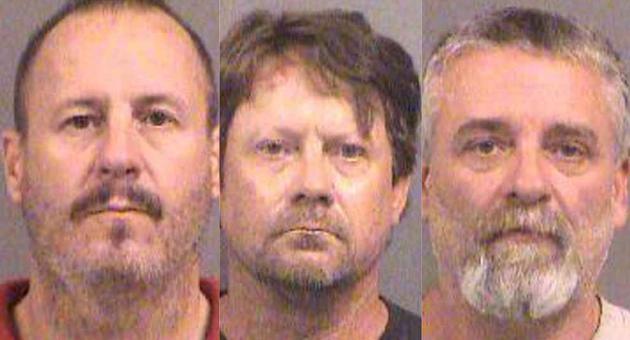 Three members of an extremist right-wing militia group were arrested Friday by the FBI for plotting an act of domestic terrorism against an apartment complex and mosque for Somali refugees in Garden City.

Patrick Stein, Gavin Wright, and Curtis Allen were taken into custody by federal agents as part of an eight-month long investigation. The FBI said all three were members of a militia group that espoused “sovereign citizen, anti-government, anti-Muslim, and anti-immigrant extremist beliefs.”

The Department of Justice reports that the three men allegedly stockpiled firearms, ammunition and explosive materials, and discussed parking four vehicles filled with explosives at the four corners of the apartment complex in order to set off a massive explosion. They allegedly planned the attack to take place on November 9, the day after the Presidential election.

Some of the rhetoric used by the men is exceptionally violent and disturbing. Stein reportedly said “the only good Muslim is a dead Muslim” and that he would “enjoy” shooting Muslims’ heads. He also allegedly commented:

“When we go on operations, there’s no leaving anyone behind, even if it’s a one-year-old, I’m serious. I guarantee, if I go on a mission, those little fuckers are going bye-bye.”

In a phone call recorded by the FBI, Stein also declared:

“The only fucking way this country’s ever going to get turned around is it will be a bloodbath and it will be a nasty, messy motherfucker. Unless a lot more people in this country wake up and smell the fucking coffee and decide they want this country back…we might be too late, if they do wake up…I think we can get it done. But it ain’t going to be nothing nice about it.”

Here’s some of the hateful postings made by the three men on Facebook:

Allen also said on Facebook, “I personally back Donald Trump,” and claimed that Hillary Clinton would confiscate all guns and place Americans in FEMA camps.Hate crimes against Muslims are on the rise in the United States. Mosques in the U.S. have suffered vandalism, arson, and destruction 78 times in 2015, according to a report from the Council on American-Islamic Relations. That’s a 400 percent jump from 2014.

Yet Donald Trump tells us Muslims are the threat and that we should ban them from entering the country. Sounds like the real threat is from right-wing domestic terrorists.